The Masks We Wear

Think back on your life so far. Think of one instant when you have made a conscious choice to be completely open and vulnerable with another person. I’m talking sincerity, honesty, and all those things that make us all so uncomfortable. No defense mechanisms, no lies, or omissions, no subtle (or obvious) changes of subject. Just one moment when you decided to lay your soul bare to another human being and let them see the whole, true you.

Can you think of more than one? Can you even think of one?

I’m not a good liar. I’m not even good at deflecting. My defense mechanism of choice is not saying anything at all. I’m a great listener, but not much of a talker. I will answer when someone asks me a question, even a personal one, but I rarely volunteer personal information without being prompted. And even when I am prompted, I opt for the briefest, most general version of the truth, making sure to skip over the parts that aren’t easy to share.

It’s partly because I take into account that most people I speak to only have the time (or attention span) for a sentence or two before they move on. The other part is I don’t want to say something the other person might consider unlikable.

People want to be liked. At least, they don’t want to be disliked. It’s a natural instinct for many creatures, human and otherwise, and there’s nothing inherently wrong with that. The problem is that we live in a very unkind, stratifying world where anything and anyone who isn’t exactly how we expect them to be gets shunned, ostracized, even bullied. So what do we do? We put our best face forward. We shape and mold the “good” parts of ourselves into a bright, smiling mask and hide all the “bad” parts behind it. We become so used to wearing those masks that taking them off begins to feel totally alien and unnatural. 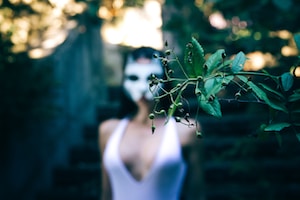 Photo by Igor Starkov on Unsplash

It plays out every single day, in every possible social situation. At work, during commutes, in relationships, in friendships, even in families. Basically, the instant we step outside the door, we become someone else, because who we are is deemed unacceptable. It’s just the way it is, so we adapt.

We live in a society that likes to pretend we don’t have bodily functions, for crying out loud. How are we supposed to accept character flaws when we can’t even accept something as natural as our own bodies? How do we even decide on the distinction between a character flaw and societal trend?

Mostly, we don’t. The world is too big for one person to change, so we change to match it, instead. We pretend to be flawless so we don’t have to face the consequences of being flawed, and we spend our lives playing the parts we were assigned at birth. Even when we’re told, “Just be yourself,” there’s always a caveat of, “Not like that!” Every big step toward ourselves is tempered by a dozen smaller steps back, concessions we make so those around us can be more comfortable with our presence in their lives. No one wants to be disliked, right?

I wrote Virtual to explore what it would take for a person to relax enough to show their true self. I gave myself a real challenge with a heroine whose career depended on presenting a strong front and who never got the chance to be vulnerable. As a self-made, successful professional, she could not afford the luxury of relying on someone else. That would signal a weakness that could prove to be her downfall. The perfect answer: A computerized home that would take care of all her needs and never judge her for them. Another wall, another yard of distance between her and the rest of humanity.

It’s so isolating it’s painful to even think about. Because when you get right down to it, those mile-thick walls might mean that no one will ever see you for you. And when you realize that pretty much everyone puts up walls of some sort on a daily basis, it paints a depressing picture of indestructible bubbles bouncing off each other without their inhabitants ever meeting at all.

The irony of Virtual is that it took a huge lie for Victoria to finally speak her truth, and that truth was as beautiful as it was sad. But the lie itself pushed Ryan farther away from her than he’d been before.

The irony of life is that people only say they’re looking for perfection. In truth, perfection is intimidating as hell because no one can ever live up to a bar set that high. We like to admire perfection from afar, but the reality of our own imperfections make us feel unworthy of it. Thus, the very ideals we strive for become the barriers that keep us from finding happiness inside and outside of our social circles.

Common advice says too much of a good thing can be bad, and “oversharing” is frowned upon. You know what I love about people who share too much? I never have to worry about where I stand with them. I never have to wonder whether they’re hiding something, or holding something back. It makes me feel more comfortable about sharing more of myself in return, because nothing is off-limits. I can be fairly certain that a person who told me about their recent struggle with hemorrhoids won’t mind when I tell them I just got my period.

I tend to gravitate toward people who are naturally more open because they draw me out of my shell, too. But even then it’s a constant challenge for me to stay that way, maintain contact, and tune out the nagging voice at the back of my head that says, “Sooner or later, they’ll just end up fading into the distance, anyway.” Like Victoria, I grow comfortable in my solitude, and making room in my life for new people gets more difficult as time goes on. Have I mentioned I’m an introvert? LOL

So I am setting a challenge for myself–and, believe me, it will definitely be a challenge–to speak my mind sooner. Don’t let issues go unspoken. Don’t let things fester. Tell the people I love how much I appreciate them, and share with them at least a little of myself.

I’m going to start now by sharing something I don’t usually tell people because it leads to requests I can’t meet:

I can sing. And by that, I mean I can carry a ballad-type tune, kind of quietly, to myself. When no one is around to hear me. As soon as someone comes by, I clam up. I can’t perform in front of people, even karaoke. My range is limited, my voice isn’t very strong, and actually I don’t like hearing my voice when it’s played back to me LOL (this includes speaking, too, just so you know), but I do like to sing when I’m by myself and pretend I could make people listen (this ties into my frustration with being cut off or talked over).

Anyway, that’s as much of my soft underbelly as I’m going to reveal today. 🙂 Until next time!

Virtual is available at your favorite eBook store worldwide:

We use cookies on our website to give you the most relevant experience by remembering your preferences and repeat visits. By clicking “Accept All”, you consent to the use of ALL the cookies. However, you may visit "Cookie Settings" to provide a controlled consent.
Cookie SettingsAccept All
Manage consent

This website uses cookies to improve your experience while you navigate through the website. Out of these, the cookies that are categorized as necessary are stored on your browser as they are essential for the working of basic functionalities of the website. We also use third-party cookies that help us analyze and understand how you use this website. These cookies will be stored in your browser only with your consent. You also have the option to opt-out of these cookies. But opting out of some of these cookies may affect your browsing experience.
Necessary Always Enabled
Necessary cookies are absolutely essential for the website to function properly. These cookies ensure basic functionalities and security features of the website, anonymously.
Functional
Functional cookies help to perform certain functionalities like sharing the content of the website on social media platforms, collect feedbacks, and other third-party features.
Performance
Performance cookies are used to understand and analyze the key performance indexes of the website which helps in delivering a better user experience for the visitors.
Analytics
Analytical cookies are used to understand how visitors interact with the website. These cookies help provide information on metrics the number of visitors, bounce rate, traffic source, etc.
Advertisement
Advertisement cookies are used to provide visitors with relevant ads and marketing campaigns. These cookies track visitors across websites and collect information to provide customized ads.
Others
Other uncategorized cookies are those that are being analyzed and have not been classified into a category as yet.
SAVE & ACCEPT
Loading Comments...
%d bloggers like this: